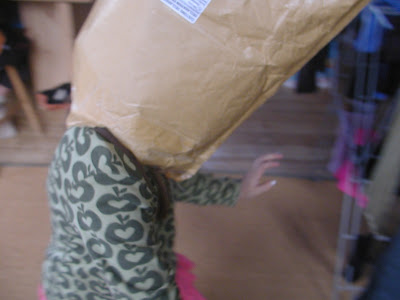 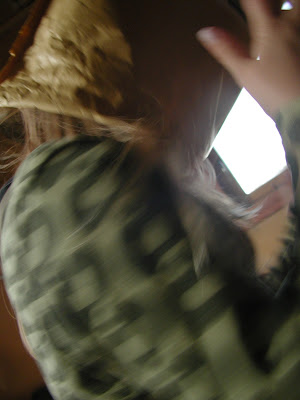 a brown paper bag sent to us from becky an lolo in the uk.
inside, the much awaited laptop lunchboxes! (turned out i had made a mistake when ordering, so i got two instead of one. which was what i wanted, but i also wanted to just try one out before i ordered boxes for the whole family. well, so far i'm satisfied, only a bit worried about how long the lid and the 'lock' will last).
the kids were dead exited.
for all of pre school and for the first five years of school, my son had the most colourful, tasty and healthy lunches made by his dad. and then it just gradually faded; the time, the energy, the interest. they're still healthy, but dead boring. the main point with ordering these boxes is to inspire us; you have to be creative with all those little boxes. most lunchboxes you can get here have either just one room, or a room and a 'lid' to place inside so you get two. but nothing as fancy as this.
when reading the booklet that came with the boxes, i was really surprised - turns out, these are made not only to inspire halthy eating habits, but also to reduce waste. turns out, in the states (where these are produced), kids eat 'disposable lunches' (prepackaged foods) instead of lunchbox lunches. now that's weird. directly and indirectly, this blogging things gives me an unexpected closer look at american culture. 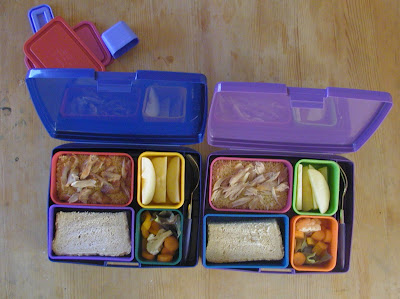 so this is our first try;
cous cous with chicken, apple, greens and bread (garlic cream cheese for her, peanutbutter for him). and for the first time ever the kids had white bread in their boxes (don't know what it's called in english, in norway it's called 'loff', but in our house it's called 'wheat, air and water' and that's the reason we don't eat it). in my defence, i should add that this is made of spelt/dinkel (don't know the english name for that either). the white bread was partly to celebrate the occasion (the kids are sooo tired of the same bread we've been baking for years), and partly because my son just had his braces adjusted and his teeth hurts a lot.
evaluation: not as fancy as these (there's also (of course!) a flickr group dedicated to these only), but a good start.
posted by therese kl. 12:15 AM

We bought these too and I love them. Yes, we have what are called "lunchables" here - it's a packaged lunch of crackers, cheese and other finger food type items. Not healthy either. Have you looked at Bento boxes?