the norwegian santa; a pagan trickster 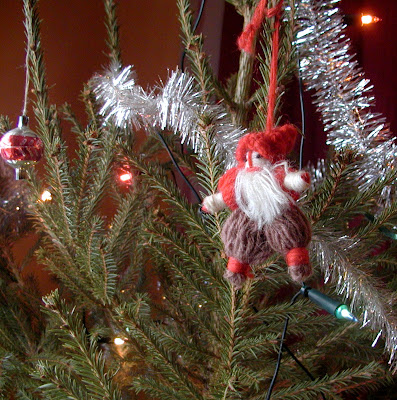 in norway, we have two predominant yule characters: santa and the nisse (anyone expecting jesus? sorry!), or rather, the merging of the two into the julenisse. santa claus is, as we know, the american commercialisation of saint nikolaus; the greek bishop who helped the poor in 4th century anatolia (present day turkey). he is said to have passed out gifts to poor children from a big sack around christmas time (which by the way is rather unlikely, as jesus' birth date was probably not yet set in the 4th century. but he might have passed out gifts around solstice). add to this the british father christmas, the germanic pagan god odin, american popular culture, et voilá - modern day santa says hi.
this guy also hit the coast of norway sometime in the early 19th century. but here, he merged with the then predominating yule figure; the creature known today as the nisse. (the name nisse is not the original one; it is a danish derivation of nikolaus, which became niels, which then became nisse). the julenisse was born, who is basically the same as the american santa except for the pagan remnants in the name. 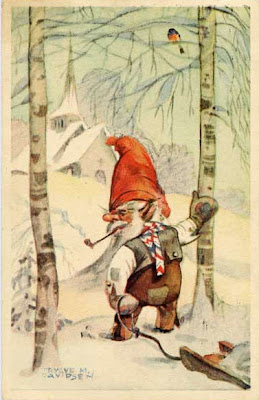 the traditional pagan nisse is about the size of a child, bearded, dressed in knee long grey or brown wool pants and a red pointed hat. he is old but strong as a horse, and a bit ill tempered. 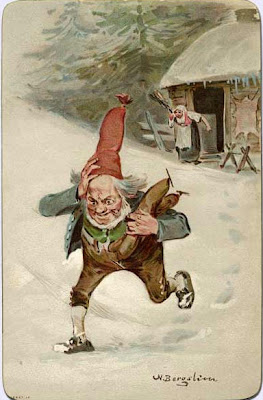 {nisse stealing meat from the store-house}
but the nisse was not a creature specifically linked to yule in the old norse society. he (he was always a he) was a vette, a kind of nature spirit that lived in the out-houses, stables, byres and store-houses at a farm. he guarded the farm, the animals, the houses, and the people living there. he was known as the haugbonde/haugkall (the farmer/man living in the hill), gardvord (the protector of the farm), tomtegubbe (man living on the farmland (the swedish equivalent of the norwegian nisse is called tomte)), godbonde (good farmer), rudkall (the man who cleared the farmland) and more. he helped out with the animals, he protected, but he was also a trickster who could become in a very bad mood if he was not tended to. he needed his food, his milk, and his bed, or else he would make animals sick or make other tragedies hit the farm. come yule, he demanded pudding and ale. norwegian children still places a dish of pudding outside the house or, if living at a farm, in the byre/stable to please the nisse at yuletide (let me get back to the rather irritating and persisting habit of writing yule instead of christmas in a later post). he was, in fact, a very attended kind of house god and a remnant of an older ancestor cult. 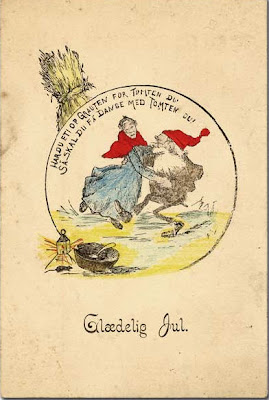 this is just an example among many of how strange and funny ways culture evolves in creative, unexpected and - for the most part - unconscious (sometimes even braindead) ways. humans equals culture equals an entity taken on a life on its own. the anatolian bishop + pagan house god = santa is a pretty good one. 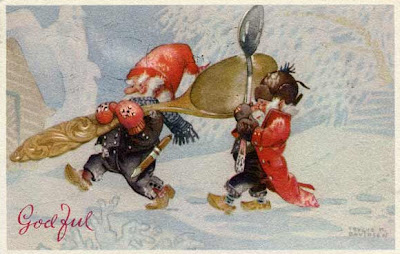 a few oddities:
during the national romantic era, the nisse became a strong national symbol for norwegians. in fact, he became so strong, that during the german occupation in world war II, his red hat was banned. yule cards portraying the nisses was already widely popular, and the creative norwegian artists solved the problem in different ways - and often as a silent protest. the hat was omitted: 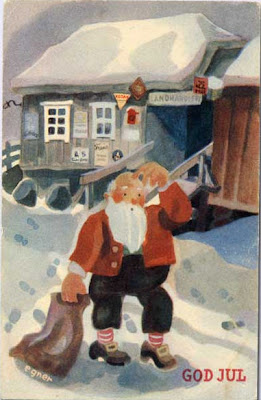 given a different colour: 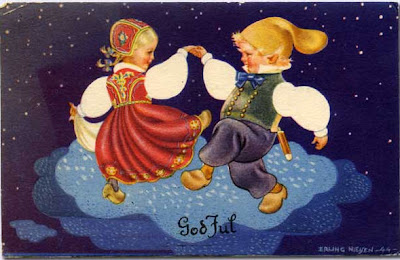 or, the opposite, made longer. for this, the artist was imprisoned for two years. it says not only 'good yule', but 'good norwegian yule'. 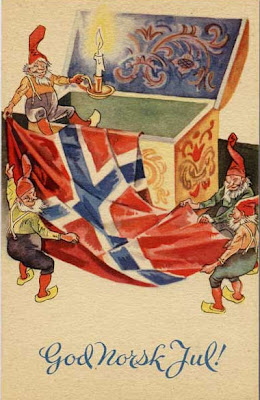 but the nisse had already a history as a figure of protest. in the 1920's, when alcohol was forbidden, the nisse was made into a smuggler, as this yule card shows. how cute is that? :) 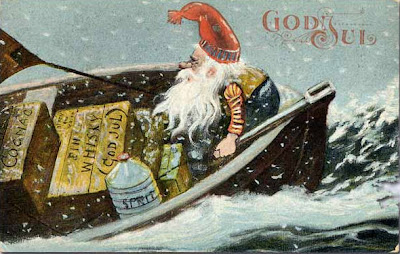 Hi from Canada, from Quebec province(the french speaking one...)! I just discovered your blog a minute ago and I'm so pleased...so much freshness, truth, simplicity and...I like to read blogs where I'm learning something !(with a particuliar tendency for scandinavian ones...)
I'll be back !

So, children leave milk and cookies for Santa as a gift of thanks, yet it may stem from tradition of appeasing the nisse with pudding lest he harm them. I don't think Santa's ever a trickster like that. Interesting that we don't really have tricksters in our stories anymore in the U.S. Even fairy tales now steer clear of terrible consequences such as witches who eat children who wander off the good path.

hi esther, thanks for your kind words :)
i couldn't find a link to your blog or email, so hope you'll be back - you are most welcome! i personally love blogs from finland :)
brent: it's as if a form of politically correctness has invaded our fairytales as well. you know, the brothers grim added the hunter in the story of little red riding hood just to give it a happy ending and keep children (or adults?)from getting scared for real. and so, added to the 'man saves girl' storyline that is so popular in fairytales.