gay as a maypole

i'm not a big fan of re-watching movies, but 'love actually' is an exception. we watch it every yule, and every time, i'm scared to death that i will be bored. it hasn't happened yet. most people label it a romantic comedy, but i don't think that shoe fits. it's about different kinds of love, and it's a comedy. not deep, but not shallow either. and mighty entertaining. period.

the first time i watched it, i was a bit sceptic because i wasn't too crazy about hugh grant (that was before i saw him in 'bridget jones' diary and realized he's the perfect slimebag - and i mean that in a good way!). the whole clumsy-but-oh-so-cute englishman doesn't work for me. (notting hill is not my hill). and it didn't look good at first. everything was realistic and well done, except for this abnormally nice, jolly, fair, cool and honest prime minister. as if! but then it gradually dawned on me... that it was a big, well delivered kick in tony blair's balls. well done! from there, it was true love. actually.

i searched you tube for clips of one of my favourite scenes, with no luck. for some strange reason, it seems that most people's favourite scene is the cardboard love declaration. but let there be no doubt; the coolest guy, in fact king of this movie, is bill nighy (aka billy mack). and the scene i was searching for is the first to come after the voice-over intro at the airport: billy mack in the studio trying to get 'christmas is all around us' right for the gazillionth time. or rather, his response; 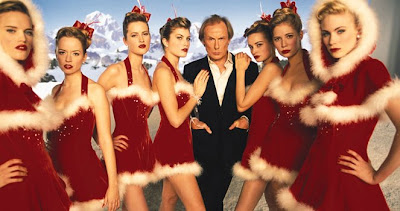 oh fuck, wank, bugger, shitting arse head and hole! no less. how can you not love that?!?

the queen of this movie is emma thompson. a moving scene is where her character has just realized that her husband is about to cheat on her, and she withdraws to her bedroom to get over the first shock. joni mitchell's 'both sides now' and thompson's brilliant act makes this a deeply moving scene. i actually found the video clip of it, but it wouldn't be fair to pull it out of its context, neither to show it here if you haven't seen the movie yet. i leave you with the song, though.

I just "found" your blog. I love this movie - and even my husband likes it so he would totally agree that it is not just a romantic comedy. I cry every single time I watch that scene with Emma Thompson.

Great movie! Bill nighy is abosolutely the best part of the movie! He is hilarious!

Hilarious! We need to watch it again. It's been years! Dallas (MODdad) cracked up reading your creative swearing line!

Hope your weekend was fun!