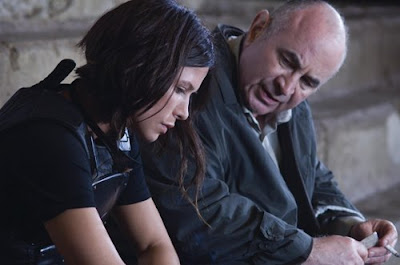 my soon-to-be-13 y.o. son has taken a big interest in horror movies lately. every weekend, he begs for one to watch, and every time, he's turned down. until a couple of weeks ago, when he tricked me into (read: i didn't check the movie first) watching doomsday.
oh my gods and goddesses and kings and queens, lord of hell and the devils grandma.
there wasn't really much i could do (was it?), as we were sucked into the story from the first scene, paralyzed by the action and unable to move except when we had to go pee - together. we clung to each other the whole movie through, and laughed with relief and adrenalin still pumping when it was over. that was one hell of a ride.
maybe i should tell you that i don't like horror, splatter or thriller movies. i never watch them; i'm too easily scared. i have very clear memories of heavy nightmares (even during the day, awake) as a kid, not from seeing such movies, but from just hearing about them. luckily, my son is different. when the LOTR movies came, i decided to read the books to him before he got to see the movies, but i gave up. the language was too detailed and boring and the books far too long for him to keep his interest up at that age. when he finally did get to see the movies, he wasn't scared at all. neither was he scared by harry potter or other similar movies. in fact, the scariest movie he has seen is 'the day after tomorrow'. "because it's so real, mum - this could actually happen".
thank goodness he's put together like that. when my husband found out what we'd been watching, he said "you won't let him watch mad max, but you'll let him watch that?!?" (we'd had a discussion about the mad max movies, which our son had heard of somehow and wanted to watch, but i said it was too violent).
needless to say, i was ashamed. i made him promise not to tell anyone at school that i let him watch it. pathetic.
and he? he loved me more than ever. he really enjoys a good scare. but i'm worried that now that i've (accidently, but still) pushed that limit, i have to deal with more begging for horror in the weekends. my husband thinks i'm over protectice, and are more than happy to share stories of what he and his friends did at the age of 13. i shut my ears.
if you have kids at a similar age, how do you deal with this?
(on a sidenote; even for me who don't like this genre, i have to say that doomsday was an extremely well made adrenaline rush and even funny. and i do love bob hoskins, i really do:)
posted by therese kl. 3:44 AM

This is so funny....great story! I'm glad you watched it with him. I will add it to my Netflix queue.

My sister and I were latchkey kids in the 80's. Quite possibly the pinnacle of horror films. We also had HBO, hoo hoo! And we always watched horror movies after homework before my Mom came home and it scared the crap out of us, we'd cling to each other and run up the stairs to the bathroom holding hands. At night, we'd race to get ready for bed because we shared a room and the last one ready had to turn out the light and leap into her bed.
To this very day, my mother says "I NEVER let you girls watch those movies" and we just laugh. We've seen them ALL. ;)

Totally Unrelated (but your story was funny!): I just read your comment on No Impact Man from the 5th and wanted to thank you for what you said. I too have never seen someone get criticized so much for genuinely trying to do something so good!

oh I don't knwo what to tell you
but I am going to rent that movie!

I'm wondering if I should feel ashamed at watching this movie with my 5 year old?

I have to say that I don't like this kind of movie either and yet did enjoy watching this, although admittedly I didn't know why! Scary doesn't really work for me.