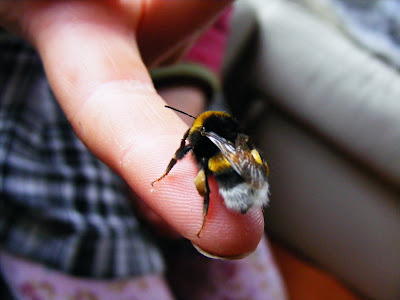 can you eat the small yellow lumps of pollen that are stuck on the hind legs of a bumble bee? after it's dead?
dead bumble bee 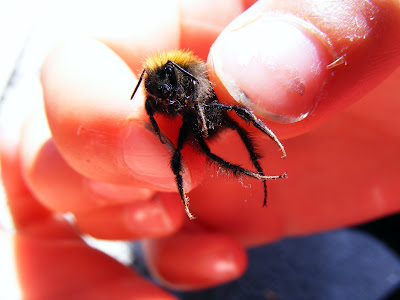 sure you can. at least that's what my daughter did. she didn't ask beforehand, and yes, she's still alive! as a matter of fact, she shared one of them with her father. they said it tasted very sweet. she's got a thing for bumble bees. she loves to stroke and fondle them. 'so soft, mama. so soft'.
it seems she's constantly collecting small animals, and i wish i knew more to give her some advice on how to feed them and just generally keep them alive. yesterday she brought home three bumble bees in a glass jar. sure, she had punched holes in the lid, and intended to pick some flowers for them, but they seemed so 'sleepy' that i slightly panicked inside and decided they had to go or they'd die. i wish we had a lisa closet - a closet with a lisa we could bring out everytime we had questions concerning bugs! 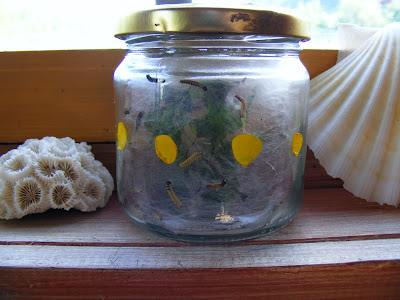 like these worms she collected from a tree. i have no idea what they are, but they were weaving this intricate and beautiful web in their jar. they didn't turn into something else, so we decided they were 'tree worms' and let them out. probably no where near their own habitat. 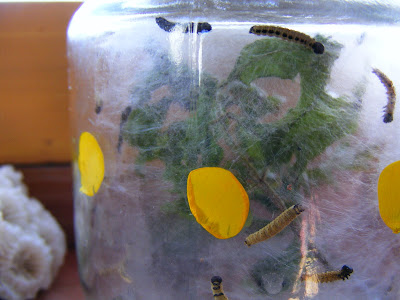 oh, and the occasional getting out of our car after we've picked her up at the kindergarten experience: 'oh no! where's my worm? i put it right there beside me!'
posted by therese kl. 1:34 AM

LOL! A Lisa closet??? You are too funny!

I LOVE it that your daughter ate the pollen off the bumble, sounds like something my girls would try. I'm a bumble lover too and right now we literally have hundreds of them visiting the many lavender and catmint plants in our garden. Your daughter would be in bumblebee paradise! I'm glad you let the little bumblebee girls go, I don't think they would keep well in a jar; they are so anxious to move on to the next flower and bring the goods back to the hive. They would probably die quickly in a jar.

Your caterpillars remind me of the tent moth caterpillars we have around here. As long as you give them the plant they were munching on when you found them; they should do ok in a jar. Keep providing them with fresh leaves from the tree they were on and they should eventually spin a cocoon.

I really loved this post and am so glad to see a mama let her children try to raise an insect, but know when to release the "pet" when needed.

You have a healthy respect for you child's interest in learning about insects...so wonderful to see this! I agree that a Lisa closet would be great. :)

We get a native bee here in Australia called a Teddy Bear bee they are stingless I think? I don't think they are as big as a Bumble Bee

When I live in Ireland years ago. I would see bumble bee buzzing about. I was so fascinated by them.

We currently have 5 different jars of various caterpillars, worms and bugs in our garage! We have the tent worms that one of the other comments mentioned and they have given my kids hours and hours of entertainment this year.
Yay for bugs!

i'm all for wee creatures and shoo them out the door, but thank goodness we stick to rocks, sticks, feathers and acorns.

at least they don't crawl away.

Reminds me of the song "I'm bringing home a baby bumble bee...won't my mommy be so proud of me.." Do you know it?

beautiful!
Love your post and bumblebees
Lost worms...that's another thing ;-)

Our two oldest are also collectors and they are not afraid of spiders and they love to scare the (...) out of me.

lisa; thanks for popping out of the 'closet'! :)
anne: the female bumble bee stings, but they seem a lot less aggressive than the wasps we have right outside on our verandah. my daughter has never been stung, and she fondles these bees almost daily.
bjørk: she's actually the least macabre in the family - when my husband wondered what he should do with all the wasps he has killed (he collects them in a jar outside), i suggested a necklace...
visty: no, i haven't heard that one!
daan: i love spiders - but on a theoretical level...:) they crawl too fast!
formigrafisk: my husband is scared too, so he hunts them - and he's the only one that gets stung. i say leave the bugs alone, and they won't bug you.