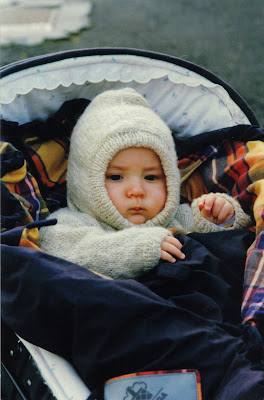 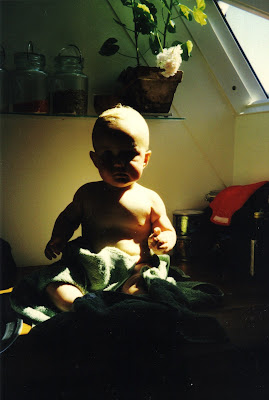 this midsummer eve*, that little buddha baby turned into a teenager. 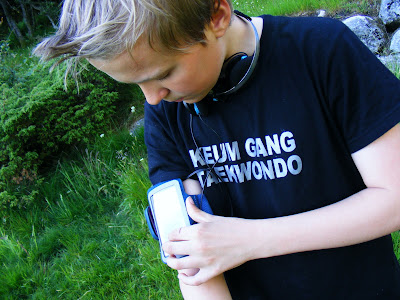 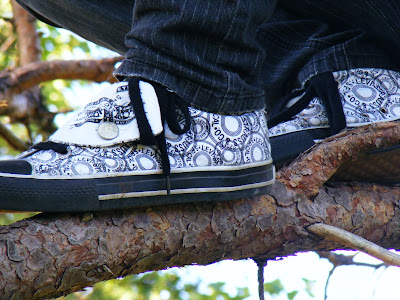 something sticky in his hair, new shoes, a brand new t-shirt from his tae kwon do club, and a 4 hour old ipod.
thirteen.
i'm not gonna say 'how did that happen?', because i was there, all along. and i remember him; every bit of him. i remember him better than i do his sister, even if she's a lot younger. he was, after all, my first.
i might remember him, but i don't remember me from all those years. all i know is that i've changed a lot, and that i'm not exactly sure how. but i know it's for the better, and i know it wouldn't have happened if it weren't for the gift of motherhood this boy bestowed upon me. 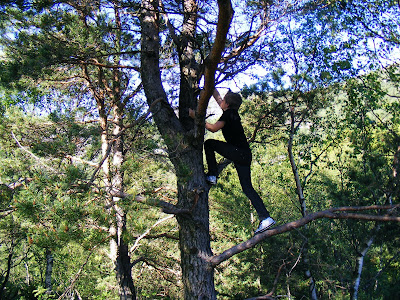 it's an interesting age. all the clichés are true. they go from child to teenager and back again in a split second, oh about 20 times a day. it really is a roller coaster ride, just as much for us as for him. it's like; 'who is he now?'. yeah. a bit like that. a bit like working with someone with multiple personalities. and work it is, but then it's all play again. whoa!
we went for a hike around a lake today, and after using his ipod for 30 minutes or so (feeling so very cool and teenage like in the middle of the forest), he declared it 'needed to rest'. he had found this tree instead. big boy, maybe, but not bigger than that. thank goodness.

*due to the church's attempt of christianizing the pagan people and their customs, midsummer celebrations take place on the 23rd instead of the 21st here in scandinavia. it is called saint hans - hans being a short form of johannes (john). (btw, in the netherlands it's called saint jan - be sure to check out daans great midsummer celebration here!). it is actually the 24th that is saint johns day, but it's an old scandinavian pagan tradition to start a celebration the night before it occurs. this is also the case for all the other christianized holidays.
moving the midsummer celebration a couple of days and varnishing it with a christian name didn't really do much, though - st hans is still a celebration of fertility and the sweetness of summer; the bonfires are still lit everywhere, and young people still take to the woods in the night.
saint john; the saint of barbeques, bonfires and a'maying. i wonder what he would have thought of that.
PS - i will post the recipe and a step by step instruction to making elderflower lemonade tomorrow.
posted by therese kl. 1:19 AM

A few tears in my eyes to read this post. It's true how fast this all goes. I have a 10 1/2 year old and I know it's coming but I don't know exactly if I'm ready. But it's part of being a parent. To roll with the changes and love and appreciate it for what it is.

Thank you for the post! I will come back later today for the yummy recipe!

That buddha baby photo is the cutest. Wow, 13, and here I am all boo hoo over 5 turning 6!

So beautiful, your boy growing up.
those photo's and your words!

Nice post and nice thoughts. I also often wonder what happened to me during all these years.
PS I think st john wouldn't have minded a little syncretism

They just grow up way to fast! Make me feel old when my grandchildren also reached that age...