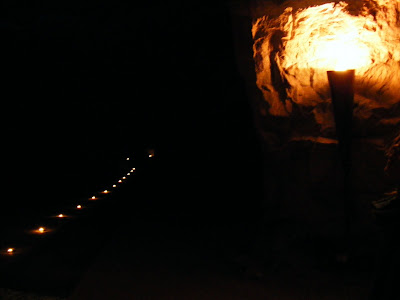 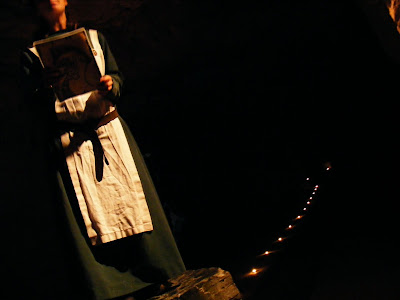 friday night there was a trip to the white caves in gudvangen; former mines in a mountain which holds the world's second largest source of anorthositt, which contains gold and aluminium. the worlds largest source is to be found on the moon! the caves were numerous, huge, and took us deeper and deeper into the mountain. the walls, or rather the mountain itself, was white, but lit up by beautiful coloured lanterns. the pictures does it no justice; it was stunning. 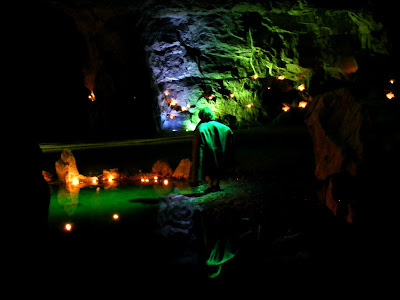 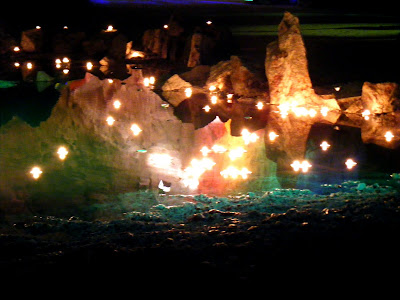 there were subtle music by grieg in some of the caves, and candles lit in the cracks in the cave walls. we were encouraged to walk in silence and enter the caves one by one. when we reached the biggest hall, deep into the heart of the mountain, we were given small candles to light and place on a pond accompanied by a personal wish. it was quite a magical experience.

the caves were ice cold, so everyone were given jackets upon arrival. the person in the picture above is a little kid in a much too big jacket.

in the big hall we were placed at tables, on benches and on reindeer skins on the cave floor. the kids were served an incredibly delicious cake (i stole some). then followed the concert we were there for; the band which played at the marketplace during the weekend, danish/icelandic krauka, played up a storm in those caves and we were dancing and having fun. 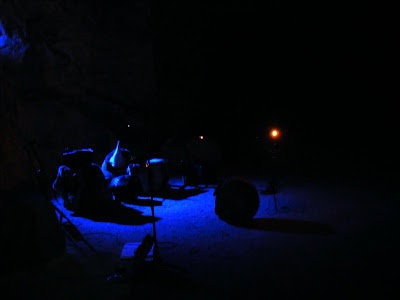 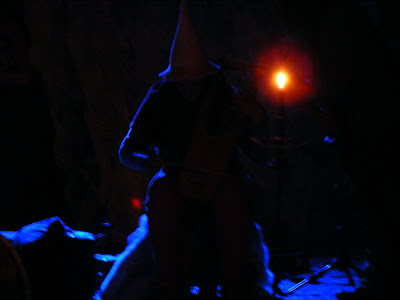 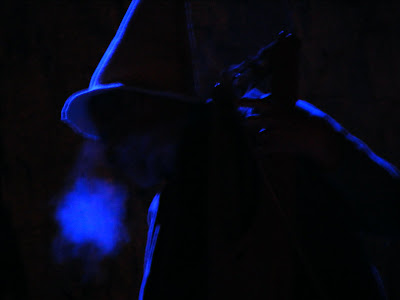 coming out of the cave door again was like entering a sauna because of the huge difference in temperature.

this was a new experience to us, as there were no cave expeditions last year. it was great!

Incredible! We have some ice caves here and now I want to have a similar experience there! So glad your summer is so magical (blessed Lughnasadh, by the way)

That looks amazing! We have various groups of historical re-enactors here in the US but unless you are Native American our history isn't quite as long! :)

Still, I love to watch the artisans and handcrafters at work. I think your Viking re-enactment would be something to see!

wowo
i really love caves and the color is amazing!!

Therese your holiday looks amazing and the photos are great.

I have an award for you over at my blog.