i had a subtle inquiry about my wedding dress. and since it is greener than green, i thought it would fit in nicely with green week. it also has a story. 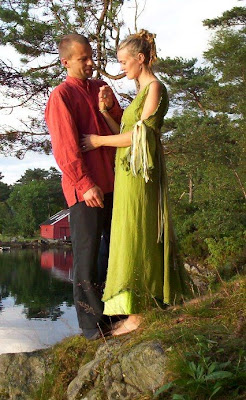 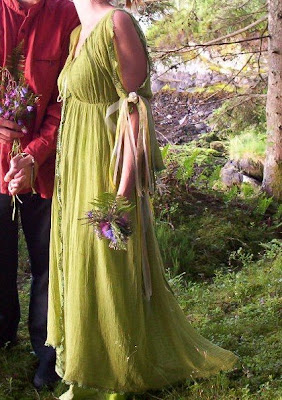 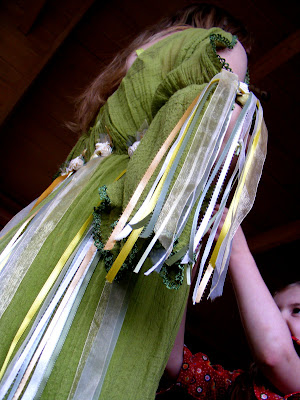 the story goes like this:
we got married in june. the whole year, i had been drowning in too much work, and was pretty exhausted. the last couple of months before the wedding was spent planning and organizing a big, week long event that took place just one week before the wedding. in between that, i was planning and organizing our wedding. we had an outdoor handfasting/wedding with 70 guests.
needless to say, i was a nerve wreck. i couldn't breathe.
i had not one single brain cell free to ponder what to wear.
that's where my danish friend mona (who finally got her own blog! yay!) stepped up, and offered to buy me a dress as a gift. she had just attended a course in needle felting with a lovely american lady who also happened to make the prettiest 'fairy coats' for weddings. i gratefully accepted the generous offer, and as it was a custom order, i got to decide exactly which colour. i asked for green; lime green.
my friend and her family arrived from denmark a short week before the wedding. the dress had not yet arrived. two days before, it did. i was the first to get up that morning, and immediately ran out to check the mailbox, as i had done the whole week. when my friend got out of bed and entered our kitchen, she found the dress in a heap on the table.
yellow.
not just any yellow, but the bright, neon like easter yellow.
in her order, she had written lemon instead of lime.
i hated yellow back then. intensely.
and at that point, i was nowhere to be found.
she got both families to their feet, and almost started a search party for me, as she was sure i had gone down to the woods to hang myself.
but i hadn't. i had gone to the store to get some green fabric dye!

the 'dress' is made of loosely woven cotton gauze, with ribbons and flowers attached to the back and the arms. we detached all the embellishment and dyed the dress in a pot, carefully not to turn it bottle green, then sew it all back on.
whew. wedding saved. 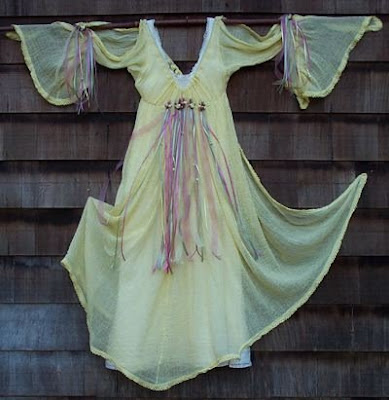 the above photo shows a pale yellow version, and is taken from this site, which holds information about the artist - ayala talpai, grand lady of needle felting. there's also a photo of her wonderful house in the woods. ayala's own homepage is here.
what you see in the photo is the back of the dress. it is open all the way down in the front, shut close by a tiny clasp underneath the breasts, and as you see, you have to wear something underneath - at least if you want to still be speaking to your in laws.
i wore a sleeveless green silk dress underneath, also a gift for the occation from another friend in denmark, who worked as a seamstress for tone barker at the time. i'm such a lucky girl, with great friends.
but there's a story to that dress as well. it would be an understatement to say that there was a certain irony to it. it had some drawings on it. there we were, in the woods, having a pagan handfasting, calling for the fertile powers of the sun, wind, trees and the moon, pouring mead to the ground to the vettir, and on the front part of the dress there was the snake...and the apple tree. how cool is that!!! no one knew but us, as it was hidden by the fairy coat.
as i dug the dress out of the closet to take some photos of it, i discovered that it was all faded. but look: 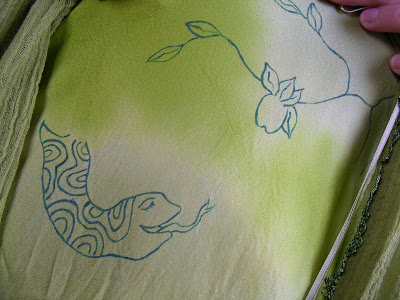 Wonderful story! What a beautiful, magical dress. Thank you for sharing.

Such a great story, it's amazing how well the color turned out! The dress is beautiful!

That is the best wedding dress ever.

Ahem, actually it was a bit more complicated than that. Naturally I(!!) didn't make a mistake when ordering. You told me you wanted the dress in the exact color as some wool(named lemon) from Kartehuset. So Ayla went to a feltsymposium (big gathering of woolfreaks, including Kartehuset) to find the wool so she could make a dress in the color you wanted. Kartehuset apparently didn't know the difference between lime and lemon - their lime was yellow and the lemon green. Ayla was sure you had meant yellow since you wanted the lemon!! Well, everything went well and you were beautiful!!

I'm glad you told the dress story. I was thinking it was special. That green is fantastic. You look like you could be in a movie.

i love the green it turned out to be, but whoa. THAT YELLOW. yikes!